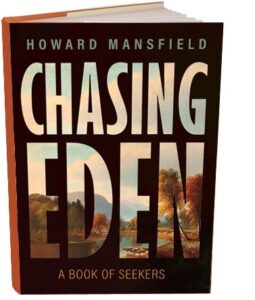 “In this remarkable book, Howard Mansfield re-mystifies the cold, hard land of the American northeast. He unearths parades of seekers — Shakers who love God and TV, divorced men who haunt the hiking huts of Mt. Washington, Pocumtucks who paddle downstream to offer a mercy that will go unreturned. His prose is at turns arresting with its poignancy and laugh-out-loud funny. It’s good to go on this jaunt with him. He has a knack for spotting the wild characters that lead us into the electric realm between memory and hope.”
—Lulu Miller, Author of Why Fish Don’t Exist and co-host of Radiolab

“Howard Mansfield journeys into stories in the same way one sets out to climb a mountain: with care and preparation. He is the most insightful of historians and journalists, and there are stories here, and reflections, that will leave you gobsmacked as to how you could have gone this long without hearing them, and holding them dear. The Eden that Mansfield is chasing is less a place than a promise—but no matter, Chasing Eden is necessary reading for anyone with a mind, a heart, and a conscience.”
—J.C. Hallman, author of In Utopia: Six Kinds of Eden and the Search for a Better Paradise

“Many of us are content to lead our lives unconcerned with the big questions our short time on this earth constantly pose. This book focuses on those who do search – relentlessly — for meaning.”
— Ken Burns, documentary filmmaker

“This book is just spectacular. Everybody should go out and buy it.”
— Jim Braude, co-host of Boston Public Radio on WGBH radio.

Two of New England’s best independent booksellers pick their favorite new books for fall.  Chasing Eden is on both their lists:

“… Writer Howard Mansfield has pursued some active chasers and written a fascinating account of individuals and groups that made attempts to create an Edenic life here on Earth. They range from the Shaker Community in Canterbury to an early 20th-century Black doctor in Keene who crossed over and back between races. And not to be missed is the powerful chapter on the 40 thousand former slaves offered ‘40 acres and a mule’ right after the Civil War. An Eden promised but not delivered.”
— Willard Williams, owner, The Toadstool Bookshop, Peterborough, NH

“I will second Willard’s nomination of Howard Mansfield’s new book, ‘Chasing Eden: A Book of Seekers.’ Millenarian dreamers are as American as apple pie, and form a fertile subject for Howard Mansfield as he once again grapples with our history and makes it feel contemporary. Mansfield is one of the few writers working today who could be called a public intellectual — like Edmund Wilson in years gone by, or Ta-Nehisi Coates and Masha Gessen today, these are thinkers who are not affiliated with universities whose interests are wide-ranging, covering broad swathes of our cultural and literary landscape. As always, Mansfield’s fertile mind entertains as much as it educates in this fantastic new book.”
— Michael Herrmann, owner Gibson’s Bookstore, Concord, NH

“Mansfield’s new book, Chasing Eden: a Book of Seekers is as thoughtful and interesting as his previous work. I always know that when I pick up one of his books, I will learn new things, even about topics I thought I previously knew, that I will understand differently with him as my guide. He has a way of deeply considering a topic, finding new stories to tell, and making connections that is both enjoyable and edifying.

“At first it seems as if the seekers Mansfield introduces in Chasing Eden can’t possibly have much in common. First, he talks about a strange (and fairly disgusting) sect of fanatical pilgrims, the Mummyjums, in the book’s introduction, and then he goes on to explore the lives of a man who befriended the last Shakers in Canterbury, New Hampshire; the strange desire to hurry from scenic vista to scenic vista in the White Mountains (and the landscape painters awed by nature in the 19th century who led us to this rushing); the lives of a Black doctor and his family who passed for white in New Hampshire in the 1930s and 40s; the terribly misleading notion of “forty acres and a mule” and what really happened during Reconstruction with regard to land for the newly freed; the residents of postwar housing developments on Long Island; and the Pocumtucks, Native American people who saved a Pilgrim community from starving in 1636 even though many of their fellow indigenous people had been massacred in New England.

“How are these disparate stories connected? What meaning does Mansfield draw from a great deal of suffering and injustice in the stories he delves into, from ideals abandoned, exploitation repeated over and over throughout history, and people judging each other decade in and decade out? He finds hope in the acts of generosity, kindness, perseverance, and dignity in each story (even when he himself has to be a seeker to find them) and in the ways that in every time and place, “longing gives form and force to our lives.” And he transmits this hope, through the stories he unearths and explores, always with gentle erudition.

“Mansfield never lectures, but he never fails to teach, and to provide food for thought. At the end of Chasing Eden, after sharing the truth about Thanksgiving and the story of the Pocumtucks’ “gift in a starving time,” he writes, “Three hundred and eighty years later, the question that I wish was at the table on Thanksgiving is: What will we do now in return?”

“A question that deserves our full attention, and a book that can help anyone seeking an answer to it.”
— Deb Baker, Bookconscious

“In three sections — one on freedom, one on peace, one on God — Mansfield introduces a disparate band of Eden-chasers …. It was a daunting task, to gather these unconnected acorns of history and find the common, exhilarating theme, but Mansfield does so masterfully, and with each chapter, leaves the reader wondering, how did I not know that before?

“He peels back these and other hidden bits of American history in his easy-going, what’s-the-hurry style that probes every corner of a story. Chasing Eden is a thoroughly New England book, even when it ventures outside the region, perfect for fall evenings by a fire.”
— Jennifer Graham, The Hippo Press

“It is impossible to read the stories that fill these pages without pausing from time to time, simply in wonder at the majesty of the author’s skill in having researched the most minute details behind historic names and events that we may vaguely remember as having heard mentioned in passing many years ago, perhaps once in a classroom discussion — then completely forgotten—only to have them come alive here as powerful, even emotional, episodes in our nation’s past….

“But it is in the section on Seekers of Peace—in which the author ranges from a description of his own boyhood, growing up in a neighborhood of Long Island, New York during the Vietnam War period, to the full, richly detailed true story of our nation’s first Thanksgiving (and you discover how little you really know about that day and its aftermath)—that Mansfield affected me most emotionally. This chapter alone is worth the price of the book!”
— Nils A. Shaprio, Boca Cub News