DWELLING IN POSSIBILITY: SEARCHING FOR THE SOUL OF SHELTER
Bauhan Publishing
ISBN-10: 0872331679

Howard Mansfield is a graceful writer with deep-rooted curiosity and a free-range mind. Reading him is like taking a long walk with a learned friend. In Dwelling in Possibility , Mansfield invites us to travel across time, geography and culture before delivering us—wiser and more thoughtful—to the full-of-meaning place we call home.
— Kate Whouley, author of Cottage for Sale, Must Be Moved

This wise and witty meditation on what makes a house a home fascinated, challenged, and tickled me. After reading it (and believe me, you should read it), you will look at your surroundings–and, perhaps, yourself–in a richer, more nuanced way.
— George Howe Colt, author of The Big House: A Century in the Life of an American Summer Home

“All that Howard Mansfield writes serves to make us see the familiar in very new ways. Starting with memories of the great ice storm Mansfield makes us see our homes as much more than shelters! He sees spirit in homes.” 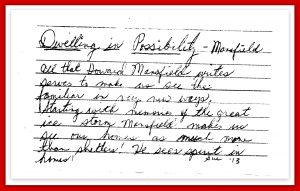 Book Riot Picks Dwelling in Possibility as one of the Best Books of 2013: “Howard Mansfield writes in the dreamy prose of a poet, while discussing everything from what makes a home feel like home to the rebuilding of communities after being literally bombed, flooded, or otherwise destroyed.”

This prolific essayist (with several books, and many articles in prestigious magazines), stands out in the elite crowd of writers concerned about a sense of place. Mansfield’s not a trained architect or urban planner; he is by nature and practice an avid historic preservationist and cultural historian. It is not aesthetics that informs his narratives; it is sensitivity to human needs; it is compassion; and ethics. He makes us look at ordinary things differently. His measure for successful housing is: “Are the people here dreaming well?”

The most astonishing feature of this book is its politically charged center. Between chapters on relatively benign subjects that make us reflective and help us laugh at ourselves, are three powerful sections on “de-housing,” specifically, our nation’s efforts to deprive our enemies in World War II of their secure homes, to set them into the streets, “to break the spirits of the people.” He writes about our bombs that won the war and left tens of thousands of families homeless. Then, when these ruined towns were rebuilt, they were stripped of meaning by Modernism, made by and for machines; and rampant technology eliminated our sense of time.

I was only halfway through this book when I began to quote from it. It is strong stuff and goes deep. It should be on every thoughtful citizen’s “must read” list.
— Karen Dahood, BookPleasures.com

How do we dwell, in the fullest sense of the word, in our homes? What does the freestanding house, which Americans have elevated to near-sacred status, mean to us? The literature on this subject goes back a long way, but it’s been booming of late…

This literature now also has a wholly original meditation, sui generis but deeply indebted to Emerson and Thoreau, to put the other works in perspective: Howard Mansfield’s “Dwelling in Possibility.” Mansfield pursues the essence of dwelling and “the soul of shelter” in a book-length essay that’s part observation of the contemporary built environment, part cultural history, part philosophical account, and at times something like a Whitmanian poetic survey…

But the book, for all its upholding of tradition and skepticism about our current habits of life, is not a jeremiad. “I don’t want to be the Judge Judy of houses,” the author told me in a recent phone conversation. Nor is Mansfield antimodern, as he demonstrates in his eye-opening account of Frank Lloyd Wright’s Zimmerman House in Manchester, N.H. The owners, who felt as if they were privileged to live in a great work of art, loved the place. But others assumed they were miserable. Americans, whose idea of dwelling features a lot of forward and upward momentum, don’t trust a house that’s entirely finished, improvement-proof, a done deal precluding expansion.

“Dwelling in Possibility” invites the reader to break that momentum for a moment to consider how we dwell in our homes. As Mansfield put it to me, “I’m mostly asking the reader to exhale, live a little deliberately, take a little time and step back and think.” There’s a clutter-clearing quality to his thinking as he sorts through a tangle of impulses associated with our homes — to accumulate goods, trade up, display status, and otherwise pursue what he described to me as “domestic manifest destiny.” It was that tangle of impulses, in fact, that made American homeowners especially vulnerable to the bad deals and skulduggery that pumped up the housing bubble and brought on the resulting crisis.
— Carlo Rotella, The Boston Globe

Not since the paragraphs in À La Recherche du Temps Perdu that evoke in their form the plump, inward-turning shape of the petite madeleine have I read anything the form of which so perfectly suggests its contents as Howard Mansfield’s peculiarly moving Dwelling in Possibility: Searching for the Soul of Shelter. Reading the book was as compelling, pleasurable and strange as visiting one of the centuries-old homes of one of my Bucks County, Pennsylvania, relatives: strange twists, hidden spaces, eccentric passions, lapidary phrases one wants to hold and own, curious outbuildings, unexpected depths that suggest “dwelling” can be a sacred occupation – or a sacred space – that how we construct our dwellings makes a cosmic difference in the quality of our personal and communal lives.

The structure of this lovely uncanny book does exactly what Mansfield says a dwelling should do – provides space for dreams, silence for imagination, organic development for a sense of possibility and lived-in-ness. … In its form, content and texture, this subtle and quirky book creates a distinct somewhere, a felicitous space, both capacious and snug, hospitable to musing and invention, an invitation to participate in creating a more humane home for us all.
— Leslie Thatcher, Truthout.org

Whenever I read Mansfield’s work I come away feeling not only informed, but expanded. His books don’t just sit on the surface of my mind, but enter it, giving me pause, inspiring me to think in new ways and invoking old conceptions, which surface in fresh form. And he does this with grace and humor, which makes it possible to digest the steady flow of ideas without feeling overwhelmed. “We are most at home,” Mansfield writes, “when we’re sheltered completely, body and soul.” Dwelling in Possibility is a shelter for the intellect, inviting, warm and true.
— Deb Baker, The Concord Monitor

This is an author who is endlessly patient while pursuing his subjects, and delightfully capable of sharing his journeys with the rest of us. As a cultural historian, there can be few more determined to understand the modern human condition. Dwelling in Possibility is thus quite extraordinary in its quiet message about how we live, and certainly a triumph for this brilliant author.
— Colleen Mondor, Bookslut.com

Howard Mansfield’s gentle polemic argues for houses that are vessels for our lives, and not just symbols of wealth.

In previous books, such as In the Memory House, The Same Ax, Twice, and The Bones of the Earth, Mansfield has shown himself as one of the keenest observers of our region’s uniqueness and how we relate to the past and to the land. And like so many notable New England writers (I see him as the successor to Vermont’s Noel Perrin), Mansfield is from somewhere else, and so sees his habitat with an outsider’s objectivity along with the convert’s adoration. — Will Morgan, DesignNewEngland, The Boston Globe

This is an enchanting and deeply intelligent book.

The book begins with Mansfield and his wife, the writer Sy Montgomery, looking for a new home in New Hampshire at the height of the housing boom…. Most of the homes the couple inspected had “curb-appall” with asking prices of similar appeal. “‘No, really,’ you wanted to say to the real estate agent. ‘That’s very funny. Ha ha and all, but really isn’t there a zero too many in that price?’”

This is the point at which the reader checks the front of the book and vows to read everything else the author has written. Mansfield’s style – colloquial, fresh, unpredictable – makes every sentence say come hither.”
— Jennifer Graham, The Hippo: New Hampshire’s Weekly

Noun or verb, what are the qualities of dwelling? This is not a book of answers with a checklist of features for the house hunter. Instead it is a thought provoking book that dwells in our historical and cultural attitudes to home.

To dwell properly “ we need to simplify. We have to restore the ordinary – the ordinary that lives in shadows, quiet, talk, the hearth.” “What matters most can not be named”, [Mansfield] says, but with this book he has successfully teased out the qualities we desire.

Is your house a good place for daydreaming? – then perhaps it has that “quality without a name” – and you do dwell in possibility.
— Willard Williams, co–owner The Toadstool Bookshops, Keene, Milford, and Peterborough, Monadnock Table magazine

Dwelling in Possibility isn’t a guide to de-cluttering a home (though Mansfield does write about clutter), nor does it offer step-by-step instructions on how to make a place, whether private or public, feel homey. Instead, it invites the reader to dream about different houses, different lives, and different times and places. It’s a book about being, not doing.
— Lary Clow, The Wire, Portsmouth, NH

This strange and wondrous book opens unexpected doors to viewing the modern home. Mansfield takes us on an odyssey that’s part personal, part historic, and always engaging… Dwelling in Possibility is a book filled with tangents and provocations, a forum where its author can roam the corridors of his far-reaching ideas. Always he circles back to the belief that a home is much more than the sum of its amenities, a place where comfort transcends material life.
— Joan Silverman, Maine Sunday Telegram

Mansfield is a perceptive writer about an American sense of place, and how people pass through and how they settle down…. Mansfield is that rara avis, an eloquent master of the discursive essay.
— Valley News, W. Lebanon, NH